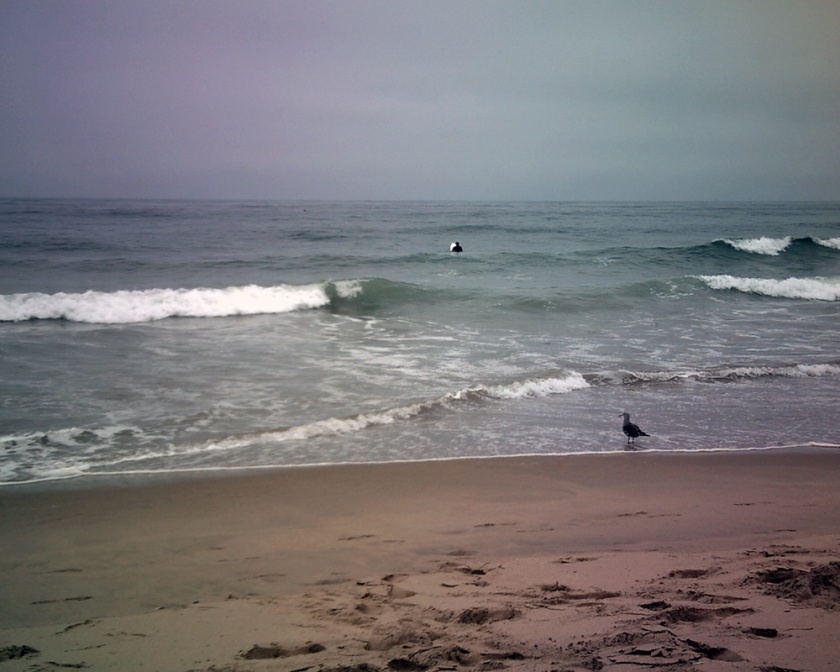 Finally, we made it to Manhattan Beach. The town was adorable at night, and positively stunning in the daylight. We had to make a pit stop at a McDonald’s on the way; we’ve had a bad habit of not stopping to eat on this trip. By 11 p.m. the most any of us had to eat was some peanut butter crackers and chocolate donuts. I tell you that was the best quarter pounder in the history of my life.

We stayed at the Sea View Inn on Highland Avenue. It consisted of a cluster of three or four buildings surrounding a small, bean-shaped pool. We climbed a couple of steep flights of stairs to get to our room. Our front wall was solid windows, giving us a view of the pool and a glimpse of the ocean. Amanda and I were in the room long enough to change and then we headed to the beach.

Now, when I think about Southern California beaches, I think of sun and the associated heat. We spent from about 11:30 p.m. until almost 2 a.m. walking and sitting on the beach and I was near hypothermia before we left. But it was worth it.

I’ve never been a water person. I swam in pools when I was younger, but I prefer to not be soaked head to toe anymore and not to sit and sweat on the side of a beach. The Pacific Ocean changed all that.
The first glimpse of the ocean I got last night absolutely terrified me. There is something about seeing the dark, smoldering grey of the cloudy night sky meet the inky black of the water on the horizon. When the only thing breaking up the shades of black are the white caps of waves crashing up on the shore, the ocean is a beautiful, terrible sight. There was no moon, no stars. The only light on the beach came from lighting along the bike path and the flashlights we brought with us.

We could have stayed there all night watching the waves break on the beach, but we were getting soaked from sea spray and frozen. I think it was around 60 degrees outside, but it felt much colder.

We intended to get up to watch the sun rise, but my Blackberry’s alarm didn’t sound (have I mentioned that I’m really over this phone?) and Amanda snoozed through her alarm. We got up at 8 a.m. and had about three hours before we had to check out of the hotel and be on our way.

It was warmer, but still cool. I really never thought we’d be sitting in the beach in our sweats shivering. But we got to watch surfers, sea gulls, fishermen and runners along the beach. I never wanted to leave. The morning was still overcast, we didn’t get out of the cloud cover until we were almost to Santa Monica. Instead of the ocean being shades of black, the water took on a greenish color that complemented the grey sky. The white caps of the waves started out brown as they picked up sand on their way up the beach.

I need to get back to this beach.

We finally left with the intention of following the Pacific Coast Highway to San Francisco but we underestimated how much time it would take to get up the coast. Not far past Santa Monica we diverted and headed straight to Sacramento. We aren’t sure yet what we’re doing tomorrow, but we’ll be figuring it out soon!