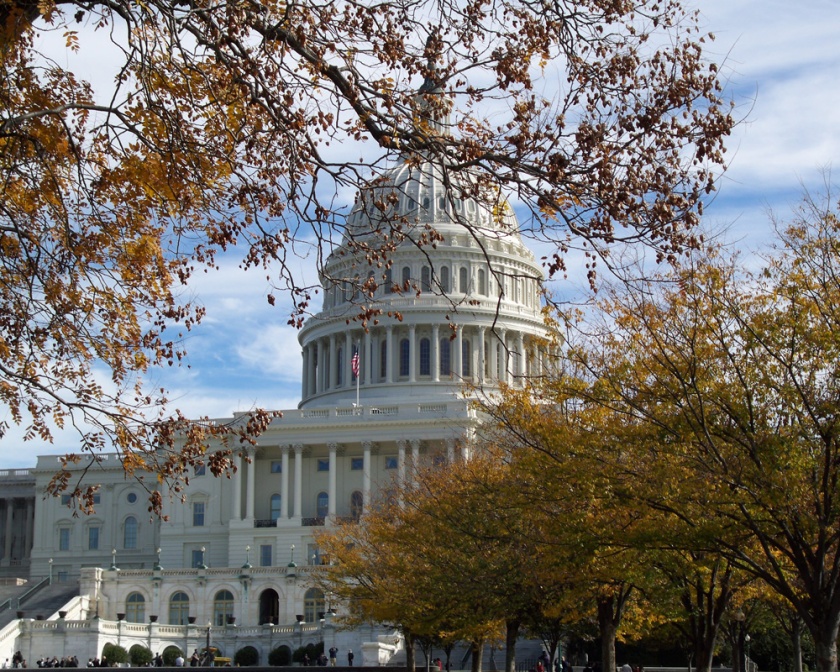 My feet are dying. I knew that all the walking around DC was going to be gruesome. But I thought I prepared for it. I carefully bought and broke in my shoes. And then I got here and realized that my pointy-toe black flats just aren’t going to work, no matter how comfortable they were back home. I have blisters on eight out of 10 toes tonight and my brown flats are going to be my mainstay until I get new black shoes. I don’t care if they don’t match my outfit.

We did do a lot of walking today though. We went to The Hill and got our press passes and Jody, our ringleader/editor/manager, took us on a tour of the House and the Senate. She showed us where the press galleries and a plethora of other rooms were, but I sincerely doubt I remember how to get to any of it. That building is one big, beautiful maze.

There is at least one cursed stairwell in the capitol, at least for reporters. The story is that back in the day a reporter was having an affair with a politician’s wife. The politician found out, chased the reporter to this stairwell and shot him. There are black spots on the marble that are alleged to be the reporters blood. Jody just said to hold on to the handrail when we’re using those stairs. Apparently, reporters fall down those steps a lot.

Before we went to The Hill, we went to the Newseum for the Knight-Battan Awards and Symposium for Innovative Journalism. (That’s a mouthful.) It was interesting to see some of the different ways journalists are using various media tools. Even with all the great information and ideas I got just from listening, the thing that stuck with me the most was one sentence from keynote speaker David Carr, a media columnist and culture reporter with the New York Times.

Between good-natured jokes, he said, “What if you took a year off right now?”

Carr was referencing the rate at which technology changes, and how very different newsrooms are now. Get ready, because I’m baring my soul a little here. That statement threw into focus for me just how out of the loop I really am. I have been off from journalism for about a year and a half. Now, I’m back and trying to keep my head above water and I’m not so sure I can still float.

But, I guess we’ll find out soon enough. I go to cover my first story of the fall tomorrow morning. I’ll be attending a meeting at the Press Club about planning for retirement. We all know that 401(k) savings plans are junk right now, and no one knows what’s going to happen to social security. I’ll bet I’m not the only 25 year old wondering what she’s going to have to do to retire. If I ever do find a job after graduation, that is.