This photo is a freeze frame from one of my favorite lightning strikes from the Wyoming lightning storm. We didn’t know it at the time, but this storm on our first night was a precursor of things to come on the trip.

Before there was the blowout, there were the storms, We didn’t know it on day one of the trip, but storms were about to become a major part of our life. After we landed in Denver that first day, we needed to cross about 1,026 miles – about 15 hours of driving – to get from Denver to Glacier National Park. We decided to spend Saturday knocking out about half of that drive time.

We covered about 435 miles and landed in Sheridan, Wy. that night to sleep. Along the way we saw some beautiful scenery and watched a storm come from the mountains and blow across the highway in front of us. (You can see more pictures in my flickr account.) But the best part of the day was driving into the lightning storm.

Of course at that time we didn’t know that driving in and around storms was going to be a recurring theme of the trip, but watching the lightning show was truly a beautiful sight. I made a video montage of the best shots I was able to get, complete with commentary from Lacey and I, and a sample of our playlist from the trip.

I just want to note that trying to catch lightning on video is like trying to play Whack-A-Mole.  The lightning strikes felt like they were surrounding us – really they were on three sides. Just when I’d think I’d have a good idea of where the most activity was, it would all switch up. We watched the storms for hours, but I only got about five or six decent shots of actual lightning bolts.

There were white markers around the battlefield to mark where soldiers fell. This group was in a line that ended in the walking path.

Day two of the trip dawned bright, clear and full of promise. We left Sheridan early and stopped at the Little Bighorn National Monument, the scene of Custer’s Last Stand. The area, like the rest of the state, is undeveloped and it really isn’t hard to look at the landscape and imagine what happened that day. The trail leading visitors around the battlefield and the markers that show where soldiers and warriors fell also help illustrate the scene. Plus, there is a tour guide who can be heard around the entire battlefield. So even if you aren’t in the tour or don’t want to hear it, too bad. You’re getting the story anyway. 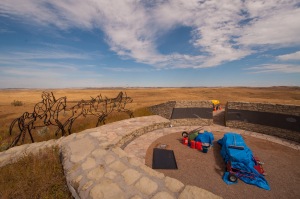 The Little Bighorn Battlefield National Monument sports a new memorial to the Plains Indians. Its still under construction and when complete the walls inside the circle will showcase various native symbols and carvings.

A new project that I’m excited about is a memorial for the Plains Indians. The metal cutouts of Native Americans on horseback are already there but there are still carvings to be done on the stone walls inside the circular monument.  I’m excited to go back and see it when its complete.

After we got through all the fun times of the day, we were ready to put the hammer down and knock out the remaining seven hours of driving we had left to get to Whitefish. That was about the time I saw the tire going away from the car and, well, you know the rest of that story.