As we’re rustling though wet leaves, its hard to imagine that this tranquil plot of land has been the subject of so much controversy. In fact, its pretty easy to overlook the community entirely. The only sound is some laughing teenagers somewhere around a bend in the road ahead, and, if you’re close enough, streaming water from the Little River.  If not for the leafless trees granting glimpses the near century-old vacation homes, you wouldn’t even know they’re there. 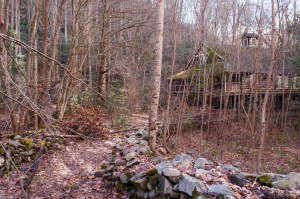 Elkmont started as a logging base in 1908. Within a couple of years the logging company had a bunch of cleared out land and no way to make more money from it, so they started selling plots to hunters and fisherman, drawing outdoor enthusiasts out to the wilderness of the Smokies. Cottages and hotels started popping up on the mountain and an elite social club – the Appalachian Club – was established. But not everyone carried enough snobbery to get into this club, and the Appalachian Club rejects wanted their own fraternity as well. So, made their own group – the Wonderland Club – and Elkmont continued its transformation to an elite vacation spot for wealthy Tennesseans.

To keep shuttling people into Elkmont, the logging company let people travel in on its railroad, even creating a nonstop shuttle from Knoxville. But once the loggers had finished with the mountain, they left like a thief in the night and took their railroad tracks with them.  Of course, the Appalachian Clubbers – including the then-Tennessee governor – and their lower-class counterparts the Wonderland Clubbers were not to happy about this. But never fear – the path left by the railroad was perfect for roads, so transportation was soon restored and everyone went back to their hunting, fishing and socializing.

When my parents visited Elkmont last summer, they walked past several of the decaying dwellings before they realized there was anything around the path. Some of the old homes from Elkmont — those that were determined to have some kind of historical significance — have been moved to a display of sorts called “Daisy Town” that’s maintained by the National Park Service. But the ones that remain are in various states of disrepair. The decision to let these cabins be claimed by the mountains was about 50 years in the making.

With controversy one – the railroad debacle – out of the way, Elkmonters moved on to what would become controversies two through 575, and all because someone went to Yellowstone.

Willis P. and Anne Davis suggested creating a National Park in the Smokies, but didn’t follow up on it. However, David C. Chapman took the idea and shared it with some influential Tennessean legislators. (Remember the Appalachian Club? Friends in high places.) Once the National Park designation started rolling, opposition sprang up. A group consisting of logging companies and mountaineers wanted to have the spot designated a national forest instead of a national park – because that would give them more freedom to use and develop the land instead of it being returned to and maintained in its natural state.

They ultimately lost that battle, but their fight did result in Elkmonters being excluded from eminent domain. Instead, they were able to sell their land for half its value and get lifetime leases in return. These leases let the owners keep the land until the last person on the deed died, and then the property would go to the park. People in other parts of the park weren’t so fortunate; many of them were forced to sell their land to the Park Service and relocate.

The park’s management plan at the time called for all of the Elkmont buildings to be removed so the area could be returned to its original, wild state. But all that changed – again – in 1994 when several buildings were placed on the National Register of Historic Places. A 15-year debate ensued. On one side were the conservationists – those who wanted everything removed and no trace of humans left. On the other – those who wanted to preserve the area, or at least the parts that represented the history of it. Finally, a compromise of sorts was reached. The Park Service decided to restore the Appalachian Clubhouse and 18 other cottages and outbuildings. But while the argument raged, the Wonderland Hotel, among other buildings, had already decayed to the point of collapse and the even the buildings they decided to keep had fallen into greater disrepair.

Today, you can see the cottages that were kept in “Daisy Town” or rent the restored Spence Cabin. If you’re feeling outdoorsy, you can reserve a spot at the busy Elkmont Campground and pick up one of the trailheads in the area.

Overall, the area is very accessible. Daisy Town has convenient parking and is mostly level. The road and paths that took us through the abandoned homes were also mostly level, but there were some inclines.  I’d rate it a three on the Gus Scale.

To get there, take Little River Road past the Sugarland Visitors Center and follow signs to the Elkmont Campground.