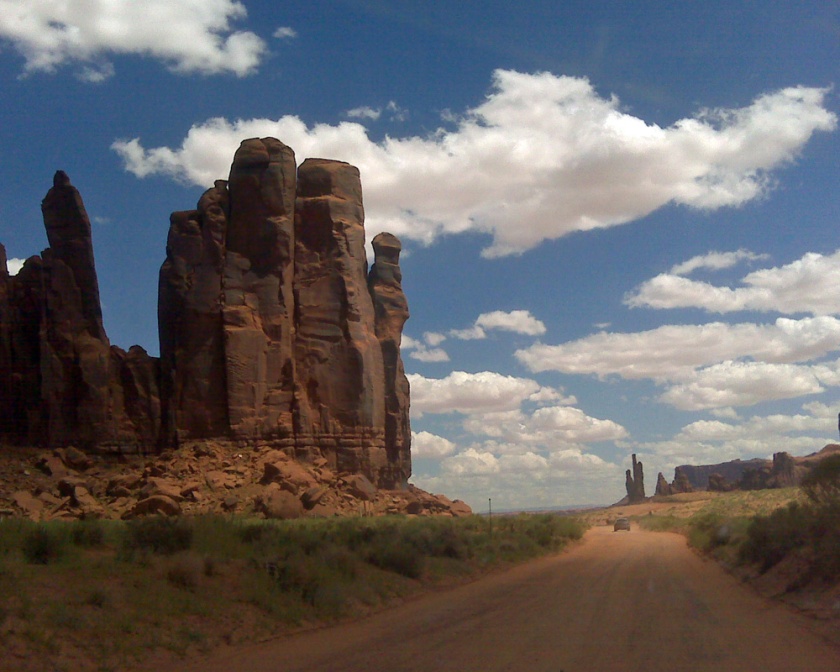 When you think of the American Southwest, you probably see a place like Monument Valley. You wouldn’t be the only one; it is one of the most photographed places in the West. With its sweeping vistas, towering rock formations and dry, dusty wind, it’s the perfect place to set down a saloon, strap on some spurs and sidle up to the bar for some whiskey to wet your parched throat. But what you will find missing from one of the most recognizable places in the American west is the cowboys.

Monument Valley rests entirely in Navajo Nation and straddles the state line between Utah and Arizona. Today, the Navajo Nation is the largest Tribal group and has the most sophisticated tribal government, but, like other Native tribes that faced relocation and forced assimilation, it has been a long road.

Their government was formed in response to requests to lease Navajo land after oil was discovered in the 1920s. But the reservation didn’t gain widespread notoriety until its first brush with Hollywood when John Ford directed “Stagecoach” there in 1939. Since then, 12 movies have been filmed in Monument Valley.

Part of the fun of visiting the valley is getting to travel through Navajo Nation. I’m a sucker for any kind of roadside stand – you can find the coolest things there. Monument Valley does not disappoint; there’s a market not far from the park entrance.

There is one main road – US 163 – that snakes its way through the valley.  Once you get into Monument Valley, there is a large visitor’s center that has a panoramic window with a view that doesn’t even look real. I’m not kidding. I looked out the glass and thought I was looking at a picture. I can try to wax poetic about it, but I’ll just sound silly and won’t do it justice. Just go see it. Put Monument Valley on your bucket list, push it to the top and go.

There are a couple of ways to see the valley: drive yourself or take a guided tour. We decided to drive ourselves. There’s a great visitor’s center before you drive the loop. We ran a little Toyota Corolla through and it handled it like a champ, even if we didn’t. When I make it back, I’m definitely checking out one of the guided tours. There are a few reasons for this. First off, I can still feel my bones jarring from the drive. I’m not complaining – a smooth, paved road would seriously detract from all that natural beauty. I am warning you though. If you have back problems, this may not be the drive for you. Also take advantage of the facilities before you start jarring your bladder.

Yes, if you drive yourself you get the freedom to go at your own pace and you don’t have to interact with people if you’re not feelin’ it. But you’re restricted to the road and can’t venture far from it. If you take a tour with one of the many tour operators you get insider backstory and access to more locations within the park – including sites off the main road.

Another option we did not take advantage of on this trip was the Piute Farms Road route. According to The American Southwest, this road leads to the site of a former Navajo Marina on Lake Powell. The marina was destroyed by flooding in 1989, and the lake has receded from the road, but the little-traveled dirt road offers a less populated perspective of the valley. The link above gives more information about how to find this road and warns that four wheel drive may be needed for part of it.

A good remedy for working out the kinks after a bumpy ride could be hitting one of the hiking trails in the valley. There is only one official trail. The Wildcat Trail around the West Mitten Butte.  Just remember that there are private residences in Monument Valley so it is important to be respectful of posted boundaries.