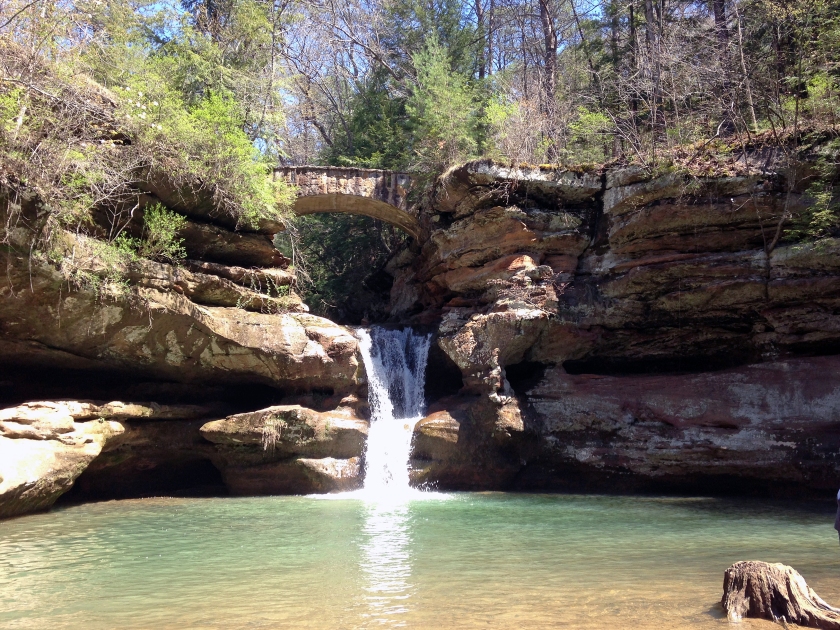 Hocking Hills State Park’s trails can be rather rugged, but there are still some suitable for members of the busted lung club. One of those is a short, out-and-back trail to Old Man’s Cave.

The Old Man’s Cave Trail gets a two on The Gus Scale, but only for the steps to get in and out of the gorge. Other than that it’s a walk in the park!

Hocking Hills is one of my favorite places to go in Ohio. This state park in south-central Ohio is full of all the outdoors you can take – but it can get a bit rugged out there, especially when you’re operating at less than full lung capacity. But fear not! There are still some things you can do, even if you aren’t able to get out to hike the full Buckeye Trail.

Old Man’s Cave is a short, easy one-mile hike from the visitor’s center. The cave is named after a hermit who lived there with his two dogs in the 1860s. You can take the trailhead that comes down behind the visitor’s center, and all the stairs that go with it, or you can hop on the trail from the opposite end of the parking lot and pass a couple of pretty little waterfalls on your way out. 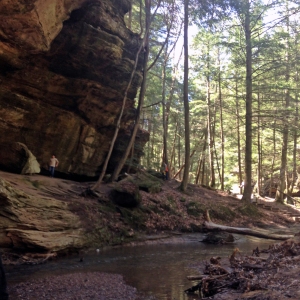 The trail follows a creek through the base of the gorge.

The downside to this path is there is a bit of a tight spot at the beginning of the trail, just past the waterfalls. There are some steps worn into rocks, and it’s a tight squeeze to get through. It’s wide enough for one person, but things get a little tricky when you have two hounds with you, competing for who’s going to be the leader. It also gets a bit tricky when people try to pass each other on this part of the trail, but it is short enough that you can usually wait to see if there is anyone coming before you start up or down. 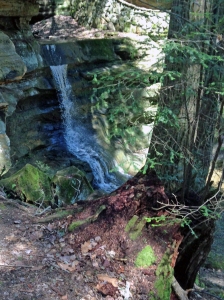 This is the second of two waterfalls you’ll encounter on the trek to Old Man’s Cave.

The trail to Old Man’s Cave is an easy mile – even if you have busted lungs. The trail is wide, and mostly flat because you are following a creek along the gorge. Getting in and out of the gorge is the only strenuous part. And I know this trail is super easy because I did half of it without oxygen (completely by accident, Dr. M! I promise.)

We hiked the mile to Old Man’s Cave and were almost halfway back before I noticed that my oxygen wasn’t puffing anymore. Imagine my surprise when I realized that the tank was full. I thought something was wrong with the gauge or the tank, but it turned out I just hadn’t turned it on when we started our hike.

Meet Stubbs, Emme’s hiking partner. They compete to see who can sniff the most trails, and get the most attention.

But not using oxygen – however unsafe that is when your lungs do not absorb enough oxygen from the air – showed me that my lungs were getting better, and stronger. If I’d had it on the entire time we were hiking I may not have needed to stop to rest at all! It also demonstrated just how easy this hike really is.

For those of you looking for a longer hike, keep going past Old Man’s Cave and take the Buckeye Trail three miles to Cedar Falls. Add another three miles on the trail and you can hike all the way to Ash Cave. Just remember – these aren’t a loop, so if you go seven miles out, you’ve got to come seven miles back!