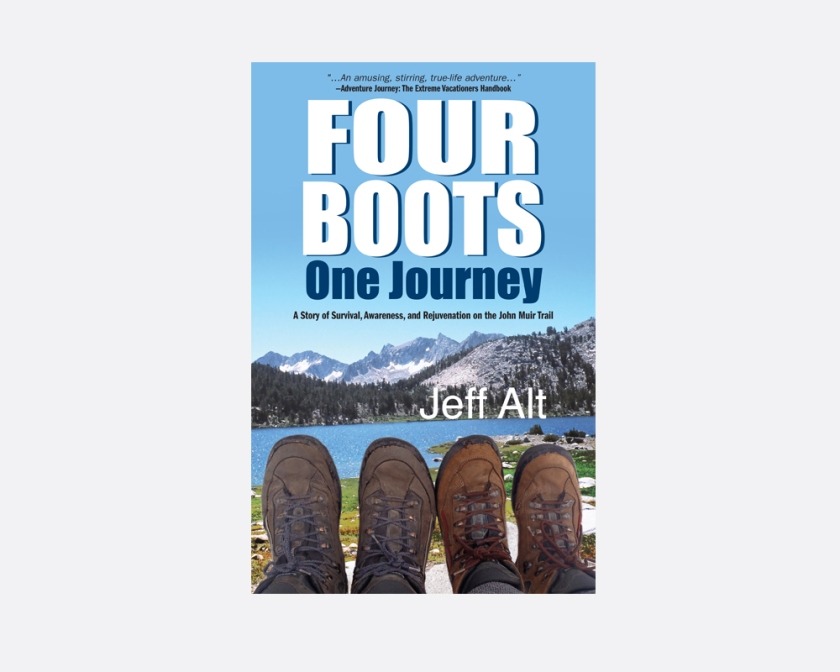 Short Description: After his wife’s brother commits suicide, the author and his wife embark on a healing thru-hike on the John Muir Trail, a 211-mile swatch of land in the Sierra Nevada that mostly follows the Pacific Crest Trail.

My favorite part: This book has a lot of great information about depression and the JMT.

“Four Boots, One Journey” has been on my reading list for a while, and I finally got around to it a couple of weeks ago. What initially got my attention about this book wasn’t the depression awareness campaign that was attached to their hike; it was the fact that they hiked at all. I’m on my annual summer hiking kick right now, and my current obsession is thru-hiking.

Long-distance hiking is something I thought about before I got sick, but now that I know my body is in armed rebellion against itself, I figure if I give my immune system and the rest of my body a common enemy (i.e. huge physical challenge) they can finally unite. (I know, I know. It doesn’t really work that way.)  So I’ve been reading as many hiking memoirs as I can find to get some perspective – and fun stories – about long hikes.

The first one I read was this one, by “Hiker Jeff,” an author and speaker. I get the feeling from his writing that he’s a very practical guy. His writing and descriptions were no-nonsense – by that I mean no fluffy, flowery language and no embellishing of the truth. I appreciate his writing style, even though I’m prone to pontificate and use overly colorful verbs and adjectives for the sake of telling stories. Even without over-dramatization, the funny parts of his story stick out – like when his wife got caught with her pants down – literally – by a park ranger.

Hiker Jeff’s wife wasn’t a hiker, but she promised him when they got married that she’d give it a chance. After losing her brother, she agreed to hike the John Muir Trail with him in an effort to raise awareness about depression and how hiking can help people who suffer from it. Even before their hike began, they started sharing their message about depression awareness to others. Jeff shows us how they raised funds to donate to a charity, gathered sponsors to help them with their hike, and set up a website that chronicled their journey. Sadly, I can’t find this website now; HikeforMike.com redirects to Jeff’s own homepage.

Their journey over the JMT was a healing one for Jeff, his wife and their family. Throughout the hike, he referenced various aspects of grief and depression, tying it in to things they witnessed on the trail. For example, when they crossed the “Golden Gate of the Sierra,” a suspension bridge along the trail, Jeff references the high rate of suicides off the Golden Gate Bridge in San Francisco, and how this bridge in their path only solidified the reason for their journey.

I have close family members who struggle with depression and anxiety, and two of my friends have committed suicide. It’s a terrifying, unfathomable thing to try to understand. Ten years later, you will still wonder what you could have done to help them.

Even though the premise of the entire hike is rooted in a devastating tragedy, it doesn’t overshadow the story. There is still plenty of helpful information about the JMT, how to hike it, places to stay, and the kinds of people you will meet. One of my favorite characters appeared at the end of the story, on the last day of their hike.

When Jeff and Beth ascended Mt. Whitney they passed a woman with whom I could identify. They said she would “take five, small, shuffling steps and stop for a period longer than it took to take the steps.” The couple tried to help her, but she refused, saying she was “just fine.”

Sometimes when I’m hiking something not nearly as strenuous as Mt. Whitney, I do this exact thing. I’ll move 10 feet and then have to stop to breathe. And I never want help, either. I appreciate the offers, but no thanks, even though I look like I’m dying, I’m doing just fine.

Jeff and Beth met the hiker again later in the day and we learned more about her. This time she was in some obvious discomfort as she rested on a rock, but she explained that her father had many health problems when he died, and she expected she had some of the same.

“But I will get over this mountain,” she told them. “I’ve got all day.” She still kept her sense of humor when she called out after them, “After this trip, I think I’ll stick to car camping.”

I would tell her NO! Don’t car camp — climb another mountain. It will only get easier. Still, I like her spirit. It’s something anyone can relate to – whether you have a chronic illness or depression or just a really bad case of the Mondays.

You can get over that mountain. You’ve got all day.