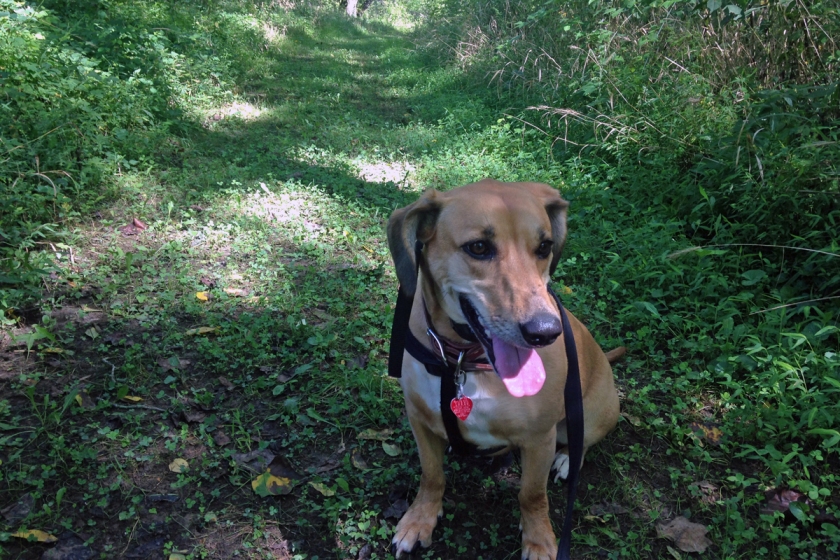 Well, hello there! I’ve been gone for a while, but I’m back now and ready to get hiking again! It’s been, what? Six months now?  I quit right after I was supposed to really start making a dent in that 52 Hike Challenge I started at the beginning of the year. But that wasn’t entirely me just letting other projects/life events get in the way. It was mostly Mother Nature and my lungs ganging up on me for basically the entire summer.  But guess what? It has been 113 days since I needed to use Gus!

My relationship with my oxygen has been like a bad romance. We get along great for a while, then he cramps my style. Then I remember I need him, but I don’t want him anymore. Until this summer, I couldn’t live with him, but I couldn’t live without him. Then one day, after a particularly difficult stroll in the park, I realized I can, in fact, survive without him. (Keep reading … you’ll get the full story.)

I really didn’t have much to talk about this summer. Thanks to humidity so high you walk outside and drown, I got benched for a while. What’s that you say? I never let weather or it effect on me stop me before? You’re exactly right! I hadn’t – until a sunny day in June. Let me tell you a story about the day I finally said, “Uncle.”

When I last blogged, I was still on my springtime high – super excited that it was finally warming up and things were turning green again. Last summer, my hiking season stayed strong until mid-August, and I never thought that this year wouldn’t be the same. Well, dear Mother Nature forgot to take her Midol for about three months and hit us with the kind of heat and humidity the weatherman says people with breathing problems should avoid.

Did I listen to him? Psh, naw. Why would I do that? I like to learn things the hard way.

I tried to power through. Yeah, sure, I can still play outside when the heat index is over 100 degrees, but my lungs aren’t going with me. In a classic Cassie move, I thought I could handle a 7-mile walk around a park. I mean, it’s one of those multi-use paved trails. Easy, right? Ha. Hahaha. Hahahahahahahaha!

The trail runs between stands of trees, but it isn’t actually shaded. We were walking on blacktop with the sun bearing down on us. It was fun for about the first mile. After that, the plodding started. I refused to give up, dug in and turned my oxygen up. And I started getting really cranky. I’m used to people staring at me. I know I look like a weirdzilla with tubing wrapped around my face. Usually, I just smile and keep on walking. But on this day I had zero patience for adults who should have better manners. So I started snarking at people when they’d stare as they walked by. Not my finest hour. (Sidenote: Adults have corrected their children for staring at me while they are doing it themselves. And for the record, I don’t mind kids staring at me. It give me the opportunity to tell a white lie and say this is what happens when you smoke, so don’t ever start! Also, for the record, I have never smoked.)

We would get to a marker and I would say, “Just a half mile more and I’ll stop.” I thought I could half-mile my way around the trail.  We turned back when we thought we were a mile into the trail, but we miscounted and were closer to a mile and a half. I was almost through my water and halfway through my oxygen when we turned back. I completely ran out of oxygen about a half a mile or so from the trailhead. It supremely sucked. But, with any bad experience, there are lessons learned.

First, I realized oxygen really wasn’t helping me much anymore. It’s not that my lungs couldn’t use the boost, as they just reach a point when it doesn’t make much of a difference anymore. So even though running out of oxygen for the first time ever was kind of terrifying, it showed me that I can get along without it. I mean, slowly and leaning on everything around me, but I can do it.

Second, I realized that I really need to pay more attention to those weather warnings and stay the heck inside sometimes. And even though I’m having a good time picking on myself for this choice, I’m glad I did it. I can’t go so far as to say it was fun, but I’m proud of myself for completing almost four miles of trail in a 110-degree heat index.

Third, but not the least of all, my friend proved for about the billionth time how awesome she is. Even when I was fighting back tears of frustration, she never stopped encouraging me. It seems like the less I believe in myself, the more she believes in me.

After that day, I realized that summers like this one are going to mean that I’m not hiking much. I spent a few weeks feeling really sorry for myself, and thinking I was doing the very thing I swore I would never do in letting this dictate my life. But just because I can’t walk seven miles in the heat doesn’t mean I’m beat. It just means I have the opportunity to do other things I enjoy. Like kayak on a lazy river where I can float when I need to rest and jump in when I need to cool off. My big hiking season is going to be winter. The cold never bothered me anyway.