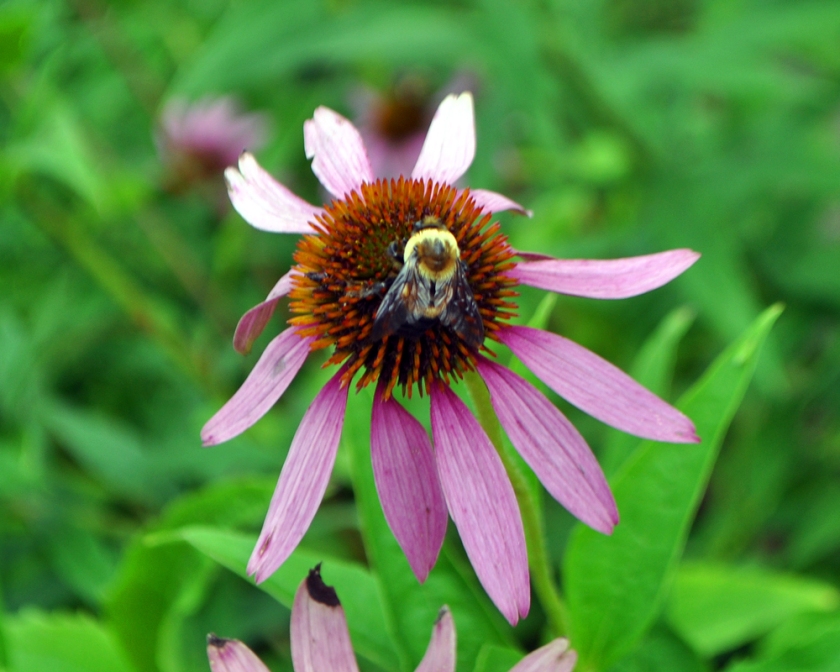 Well, that summer flare Dr. B. warned me about finally hit about two weeks ago. (I started this post and several others about a week ago when the flare receded for a couple of days, only to come back and kick my butt for several more days.) At the beginning of the summer, my rheumatologist told me that too much sun exposure could cause an increase in symptoms. Knowing this, I canoed for about four hours during the heat of the day two weeks  ago. And then I spent most of the last two weeks feeling like someone was taking a hammer to my joints. If I could have floated in a zero gravity chamber so nothing could touch me, it would have been a dream come true. But hey! It didn’t seem to affect my lungs at all, so I’ll call it a win. 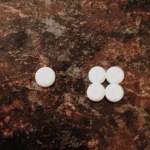 This picture doesn’t show how teensy they are, but the four together are about the size of a fingernail. The day I messed up my dose, I took the four small ones – 4mg and left the one larger one – 5mg – behind. Oops.

I must pause to note that the day I felt the worst I can’t completely blame on sun exposure. I spent a day at work unable to focus on a thing the trainer said and unable to even rest my wrists or elbows on the desk. When I got home I realized I took less than half the steroid dose I was supposed to take in the morning. Let me tell you, you don’t realize just how much impact those teensy little pills make until you miss one.

Here’s the best (dumbest) part: I’d totally do it again! Canoeing is awesome. I got to spend a good bit of time with some family I don’t get to see often, and a day of paddling is always a fun. In fact, I am determined to buy a kayak before next summer so I can get out on lakes or up a creek as often as possible –preferably still with my paddle, but you know how my luck goes. Probably after four or ten more trips out I’ll figure a way to keep the flare from being so bad.

Even though laying around does absolutely nothing to help the flare pass more quickly, I was too lazy to get up and get out last week. Instead, I spent more time catching up on some blog reading and being inspired by Instagram feeds. Here’s a short list of fellow adventurers I follow – and if you’re ever having a down day, maybe they can help cheer you up, too.

This guy is a veteran who now spends his time hiking. So far this year I’ve followed him around out west. He recently took a break from the Pacific Crest Trail to complete part of the Sierra High Route and will be going back to complete the rest of the PCT. His pictures are phenomenal, and not just because he’s a great photographer. Every time I see one of his photos it only reinforces my determination to hike the PCT the second I can get around without oxygen.

If I could live anywhere, I would choose either Montana or Alaska. I’m super envious of this woman who moved to Alaska from Europe. Every day she delights with pictures of places that I dream about. Mountains, stream, glaciers, helicopter rides, kayaking and hiking are just some of the things she posts regularly. Her feed has me itching for the day I finally set off on my Alaskan adventure.

When I have weeks like last week and am too lazy to move, this woman makes me feel about two inches tall. She has battled rheumatoid arthritis – dubbed “Arthur” – since she was a child. Nothing I’ve ever dealt with compares with what she deals with on a daily basis, and she’s training to climb Denali. If this girl can keep up with her training and prepare to climb a mountain, I can keep on hiking.

This lady’s trip is wrapping up now, but you can still go back and follow her adventure from South Dakota to the tip of South America and back on her bike. She left her job, sold everything and decided to live on the road. It’s basically what I’d do, except with an SUV or something because I don’t think I could pack that light. Or ride a motorcycle for that long.

I started following this guy before I ever got sick, but his blog took on a whole new meaning after the whole autoimmune disorder/lung disease thing started. He has inflammatory bowel disease, and keeps on adventuring despite his health problems. He has periodic stints in the hospital because of his disease, but through it all, he’s kept pushing through. Earlier this year he even completed the London Marathon.